Here in Canada, most of us start to run out of youth hockey leagues in our mid-teens. Unless you’re playing high level hockey, the available house leagues start to dry up around the age of 16.

I played some rep level hockey growing up but I stopped playing cold turkey around the age of 16. A lot of it is lack of interest and better things to do with your time. Even if you want to keep playing, the leap between youth hockey and playing men’s league is a large one. By the time I was in my mid twenties I honestly didn’t think I’d ever play hockey again and wasn’t concerned about it. 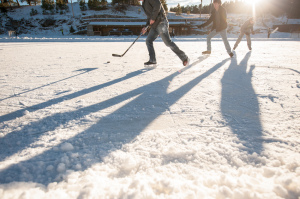 In my early thirties, a friend I was commuting to work with kept inviting me to play with their hockey team named The Klowns….

“Do you have equipment?”

“Ahh I think my kid equipment is in my parent’s basement.”

“Can you skate backwards?”

“Just come out, you’ll probably be our best player.”

I went into my parent’s basement and dug out my childhood hockey equipment. After not having even laced up skates in about 15 years, I headed to the rink. I played that night and didn’t make a complete fool of myself. I went back again the next week and after a few months I was starting to purchase pieces of gear to replace my kid stuff.

Fast forward to today, I play 3 to 5 times each week and have been for a decade or more. If you’ve had a taste for the sport of hockey and have even the slightest interest in returning, what are you waiting for? You don’t have to find a team or play competitive hockey, just find yourself a great local game of pickup hockey.

PS. If your skates are more than 15 years old, replace them once you know you’re going to play regularly! I really wish someone had told me that.