It’s two minutes to game time and there’s only one tender in the room. As the Zamboni finishes flooding the ice, the guys groan as they realize they’re shooting at an empty net. Again.

If this sounds all too familiar, you understand the difficulty in finding two goalies for your pickup hockey game. Nobody likes shooting for posts, even for only half the game. Instead of continuing to disappoint the rest of the squad, there are a number of simple ways to avoid busting out the old goalie tarp.

Treat them with respect

Goalies are fickle. They know how important they are. The next time one of your skaters ices the goalie as they’re covering the puck, remind them of a few things:

Treat them with respect. There’s a reason why NHL teams leave their goalies in peace in the locker room. They are, without a doubt, the most important player on the ice. The same goes for pick-up hockey. 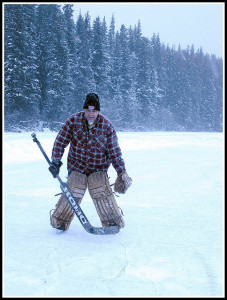 This is a general rule for pick-up games. Goalies should always play for free. It’s simple supply and demand; you need them more than they need you. Plus, their equipment costs significantly more.

When pricing your game, always exclude tenders in your calculation. Your squad should be more than happy to shell out a couple extra dollars to ensure that there’s two keepers every week.

Versatility is the name of the game. Ask your skaters if they know someone who could step in at the last minute if needed. They might even be a better fit than your regular goalies.

Some guys might even have two sets of gear. Treat them like the Gods that they are. Having a solid plan B in case of an emergency always helps. It’s up to you to decide if these guys should pay when they play as skaters. Work it out on a case-by-case basis, but remember, lugging two sets of gear to the arena every week is a hassle. It might not be a bad idea to let them play for a discounted price.

Pick-up hockey goalies know their value. That’s why some guys have made some serious cash on the side by renting out their services. You can check out your local Kijiji listings (we’re not kidding), social media, or rental websites. The costs can range anywhere from $30-$50/hr depending on local availability. It’s not ideal, but it beats an empty net.

You can avoid most of the headaches of finding two goalies for your pick-up hockey game by getting 20Skaters to manage your game. Our extensive list of local hockey players, including goalies, is a great resource for filling the creases in your game.

Our game management system allows organizers to see exactly how many confirmed players they have in a given week, including goalies. Players are sent a series of emails throughout the week, reminding them to confirm or decline their attendance. To avoid any payment hassle, players designated as goalies don’t have to pay.

For those that live in the GTA: if for any reason you’re short a keeper and we don’t have an available fill-in on our list, contact the guys at Goalie911. They’ll give you a $5 discount just for telling them you’re signed up with 20Skaters.

Even after you have two solid regulars, stressing about potential no-shows or last minute emergencies can ruin the fun of pick-up hockey. 20Skaters takes the hassle out of organizing your game. Stop worrying, and enjoy your game.