To date, I’ve personally only ran the occasional pickup game myself. This year I decided to start hosting my own weekly game. I’m eating my own dog food as they say. (Yes that’s a real term, no it’s not worth looking up.)

I thought I’d write in my diary as I go through this season to share my firsthand experience organizing weekly pickup hockey. So, here goes…

It’s Brydon here and it’s been a while. Sorry, it’s me not you. So as you know I built this platform to help people run their weekly pickup hockey games. It’s built to make life easier for the organizer and the games better for their players. It works great. 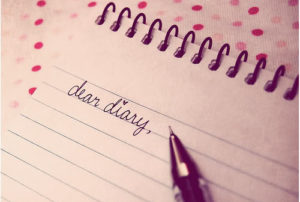 Last week was my 3rd game and I managed to validate two core things so far.

Where my game is at?

We soldout week 1, which was a great start and had me complacent. No problem, this organizing thing is cake. Then week 2 we had two goalies, which is key, but only 13 skaters! We resorted to playing 4 on 4 which was ok but the game slows down quickly.

On the finance side for week 2, that’s 7 spots not sold which translates into $140 uncollected. This is the big problem we’re working to help solve. Most games, including mine, are basically poorly run non-profits. You set the price so that you recoup your costs and you assume perfect attendance as you don’t want to make money on this. The problem is when you have a few weeks like my week 2, you’re done. You don’t ever have a week with 27 skaters to make that up.

Last week, week 3, we ended up with 17 skaters, 5 skaters paying within the final 4 hours before game time. Our games have been great, I feel that demand is building to play in the game. I’m bullish that we’ll sell out this coming week’s game!

What have I learned so far? No one is really committed until they pay, bottom line. Everyone wants you to run a game, it’s just more hockey options for them. Until they pay, you really have no idea if they will play.

Keep pushing and add as many subs to your lineup as you can until you are consistently selling out week after week. You can see below in my lineup view, emails scribbled to protect the innocent, I have 60+ players on my list right now across all rounds but it’s still not enough. 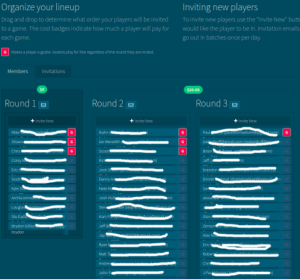 More full timers. We have lot’s of new games like mine that are selling out from the get go. Those tend to have 15 to 20 full time players who have already paid for the entire season. In that case, those players are committed to playing and you’re likely to only need to sell about 5 sub spots each week. The caveat being that we do have people who run game with no full timers and still manage to sellout every week. Those folks have large sub lists(80+) and engaged sub lists.

However you do it, you have to create demand! You create demand by selling out games. Soldout games means more people want to be full time, subs grab spots sooner and it snowballs.

It’s been so good to catch up again diary and clearly my hand writing skills are still top notch….